Getting serious about Seriously Cereal

Stocked and loaded: Richard Gilliat, creator of Seriously Cereal, poses in front of his eclectic stock of cereals stored at his apartment in Calgary, Alberta on March 14, 2017. Gilliat makes road trips to the United States often in order to restock his shelves for his business. (Photo by Shane Weaver/The Press)

A quick trip down memory lane can be as simple as munching on a spoonful of childhood cereal.

For over two years, Calgarian Richard Gilliat, 40, has committed to delivering such flavourful flashbacks across Alberta with Seriously Cereal, a mobile food vendor that specializes breakfast items like cereal and Pop-Tarts.

“Parents, as soon as they see [the booth,] they all fall in and tell me their stories about onesie pyjamas, what kind of cartoons they were growing up on, and what their favourite cereal of the morning was,” said Gilliat.

Originating as a food booth at pop-culture conventions, the business now operates out of its own vendor trailer that Gilliat can transport throughout the province for public events of any sort.

“It blew my cereal loving mind to see a booth selling all kinds of different cereals you can’t get in Canada,” said Tyler Gerard, a longshoreman working out in British Columbia.

Gerard’s fiancé runs her own Walking Illustrations booth at the comic conventions in Calgary and Edmonton where she sells custom comic-style footwear and cellphone designs, giving Gerard plenty of opportunities to track down Seriously Cereal.

“It feels great knowing I’m not the only Cereal fan out there, and chatting with Richard is always a pleasure while I’m munching on some Cereal I didn’t even know existed.”

“It’s a dream I had with a bunch of friends sitting around years ago when I was in college.

“My friends all laughed at me, they thought it was ridiculous and I just put [the idea] on the back burner,” said Gilliat.

However, years later he discovered the existence of the Cereal Killer Cafe in London, England over social media.

“They had my name and my general idea, and I was like ‘Ugh, I should have done it sooner,’” said Gilliat.

Although disappointed, the establishment proved to Gilliat that the idea could work, so he decided to revisit his idea with the help of a childhood friend, Joe Wright.

“He always had the greatest, most exciting and fun ideas,” said Joe Wright.

Wright, who hosts his own Internet radio station Northern Pirate Radio, used to lived around the corner of Gilliat in Cardston, Alberta. 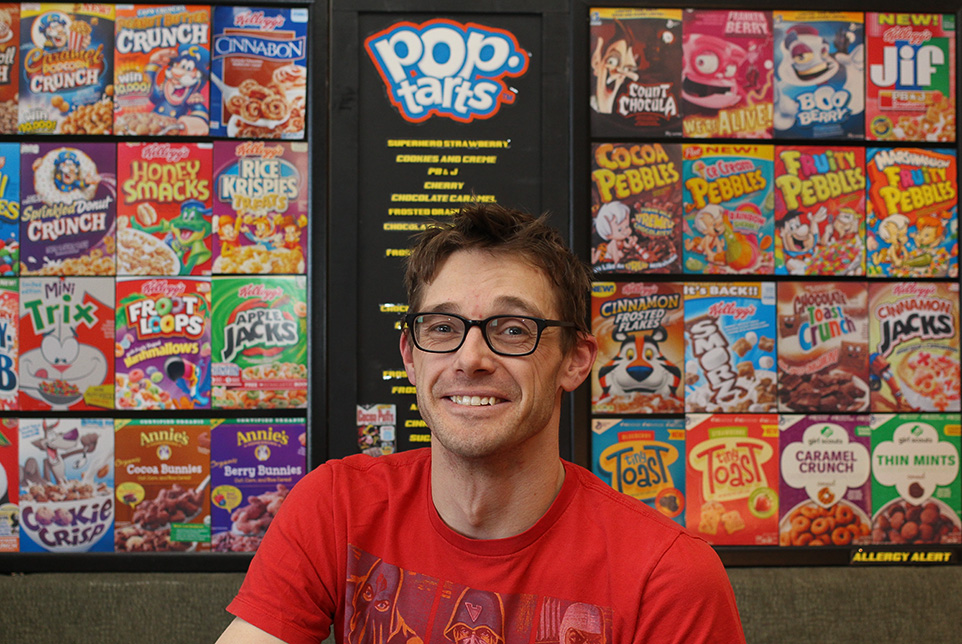 Breakfast of champions: Richard Gilliat sits in front of his menu available to order from at his mobile concession stand, Seriously Cereal, in Calgary, Alberta on March 14, 2017. Gilliat attends numerous conventions and expositions across Alberta to offer his unique wares of foreign cereals and breakfast items to hungry attendees. (Photo by Shane Weaver/The Press)

“I grew up with that kid down in Cardston, played a lot with G.I. Joes and things like that,” said Gilliat.

“Back then, everyone played outside and went on adventures down by the creek,” said Wright.

In September 2015, the two acquired a business license and made preparations to open a booth at the Edmonton Comic and Entertainment Expo under the title of Mighty Bowl.

“It felt like we were kids again doing this great idea that my best friend from my young childhood came up with on a Saturday morning,” said Wright.

The duo set off for Great Falls, Montana to stock up on exotic cereals for the event, a peculiar business to explain at customs.

The vehicle was packed with roughly $400 USD worth of breakfast items before Gilliat and Wright returned to Canada.

“We cleaned out the cereal isle in the Wal-Mart in Great Falls and got a bunch of crazy looks.

“It was five full shopping carts of nothing but cereal and Pop-Tarts,” said Wright.

After the convention in Edmonton, Gilliat renamed the business Seriously Cereal and registered for many more conventions, but decided it would be financially best to continue running the business on his own.

“There was not enough money for two people to have their hands in it,” said Wright.

Gilliat continues to make trips across the border to restock his wares, but also receives help from friends living in Boston, Massachusetts and Houston, Texas.

“They’ll keep and eye out for me, send me pictures, and if I want it, I’ll get them to send it to me,” said Gilliat.

With plans on the horizon for a mystery box subscription service that delivers a random assortment of breakfast items in the mail, it’s clear that Gilliat is taking Seriously Cereal very seriously.

“Whether you are nostalgic, or a kid right now, cereal will always be an option for people,” said Wright. 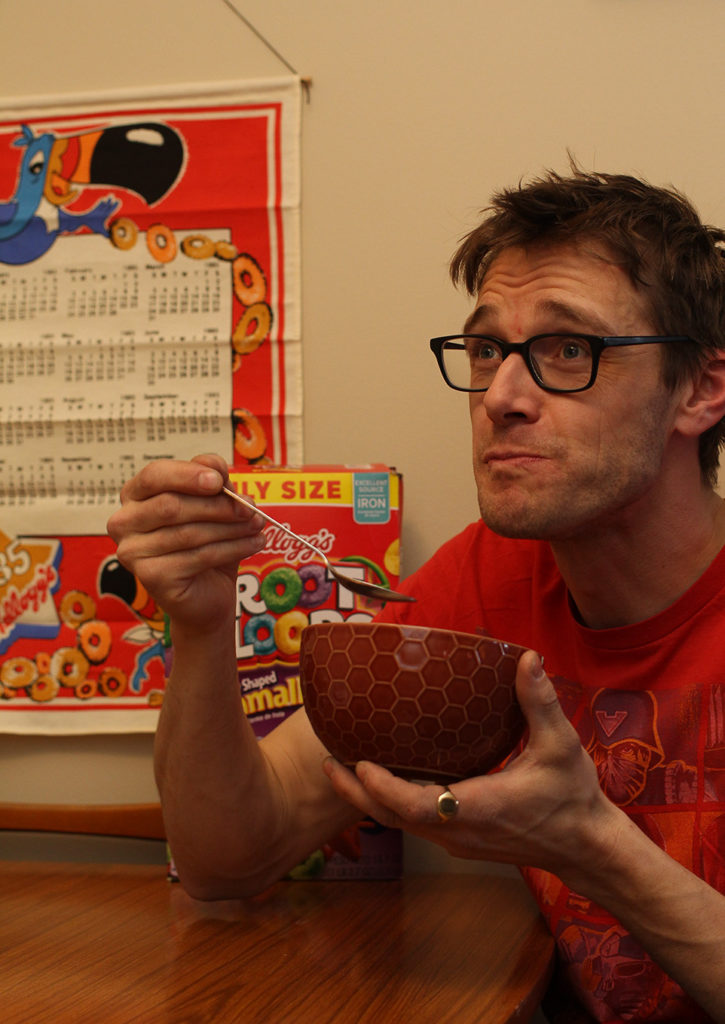 Sweet tooth: Richard Gilliat eats a bowl of Kellogg’s Fruit Loops with marshmallows, just one of many types of cereals he sells at Seriously Cereal, at his apartment in Calgary, Alberta on March 14, 2017. Along his menu of cereals and other breakfast items, Gilliat is also introducing a subscription service that will ship a mystery box of breakfast items in the mail to subscribers once a month. (Photo by Shane Weaver/The Press)