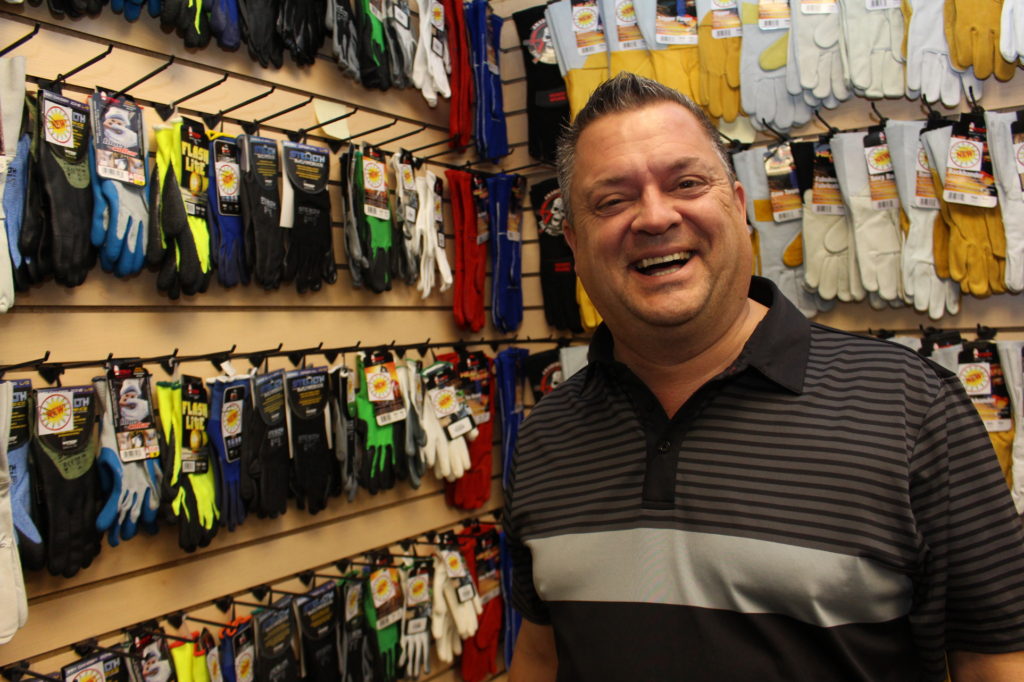 A photo of Watson Glove rep Randy Dreager standing in front of a display of his product. (Photo by Shane Weaver)

Years of selling experience has brought Calgarian Randy Dreager to Watson Gloves, giving him the opportunity to become the company’s most travelled sales representative.

Though born in Vernon, B.C. in 1965, Dreager moved here at five years old, when his father took up prospecting in the area.

He has lived in the city ever since.

During his final year of secondary school, Dreager worked two hours every weekday at Associated Grocers, sweeping floors for $6 an hour, as well as working full hours on Saturdays and earning an extra dollar per.

“This is where I really caught on to the wholesale and selling business, where I was really developing sales skills,” recounts Dreager.

Despite simply sweeping floors, Dreager witnessed which products were popular and could offer guidance and recommendation to uncertain customers.

“You start developing the features of the products, and that’s selling.

“You don’t even know you’re doing it.”

Upon completing high school, Associated Grocers offered Dreager a fulltime job, but he declined, instead taking up a friend’s offer to work as a forklift driver at Federated Co-op for $10.78 an hour.

Dreager held this career for over 17 years, taking on multiple positions such as customer service admin and building materials buyer.

In 1987 the company offered to pay 75 per cent of tuition and textbook fees to any employees looking to take secondary schooling.

He used the opportunity to acquire a Diploma of Business and Administration in 1991 from Mount Royal University.

While simultaneously balancing school and a full time job, Dreager also took us an offer to become a condominium manager.

“This is when I learned about management.

“Running a 12 unit condominium is a lot of work: planting all the flowers, making sure the sidewalks were clean, all that stuff,”

While that burdened him with extra responsibilities, Dreager had the benefit of living rent free in a three-room suite with a fireplace.

On top of it all, he started a band called Down Twisted in 1990 with his roommate, Lawrence Hewitt.

With Dreager on guitar, Hewitt on drums, and a bass player named Tony Copping, the three-man band would often practice in a jam room inside the apartment complex.

“I’m in a 12 unit complex and no one ever complained, cause I’m the boss,” remarks Dreager.

The band stayed together for 15 years, even introducing another guitarist, Rob Elliot, in 1999, with the disbanded crew remain good friends to this day and all three members attending Dreager’s wedding.

Departing from Federated Co-op in 2001, Dreager took up a job offer at the wine producer Vincor Canada as the sales representative for southern Alberta.

He travelled to distributors across the region to advertise and promote the company’s brands of liquor.

However, with career fatigue setting in and a divorce process under way, Dreager decided to quit his job after five years to reassess his life direction.

“This is the best job I’ve ever had,” asserts Dreager.

Dreager recalls his interview for the job, entering the dimly lit office of Moe Parent to a wafting scent of booze and tobacco as Parent sat smoking his cigarette, casually conversing with Dreager before handing him the position.

“Honestly this is how it went.

“I’ve never had an interview like that in my life.”

That office would eventually become Dreager’s, as Parent was let go from the company only a month afterward, ending a 15-year career.

Dreager became Watson’s sales representative for southern Alberta in place of colleague Kasey Whitman, who became the company sales manager and is now set to succeed Martin Moore as president of Watson Gloves in 2017, the first outside the family line for three generations since the company originated in 1918.

After proving successful in Alberta, Dreager expanded his sales responsibilities to further regions of Canada, including the Northwest Territories, British Columbia, and the entire Maritime Provinces.

“Randy is a super crazy guy, he loves going out on the road.

“You can send him anywhere and he gets along with anyone,” conveys Rosemary Keon, colleague of Dreager for the past decade.

From 2010 until 2015, he travelled to eastern Canada three times a year to promote Watson’s products and build the brand, living out of hotels for three weeks at a time.

“The east coast was an amazing adventure for me.

“My weekends were full of going to wherever I wanted to go, and I went and toured everything.”

Despite being the most travelled salesman at Watson Gloves, Dreager has never called anywhere else home but Calgary, having remarried last year and purchased a new house.

Dreager looks forward to his future ventures that will no doubt keep him on the move as Watson Gloves continues to expand.

“They just keep sending me places, and I just keep coming back,” exclaims Dreager.

“I don’t even know where they’ll send me next.”